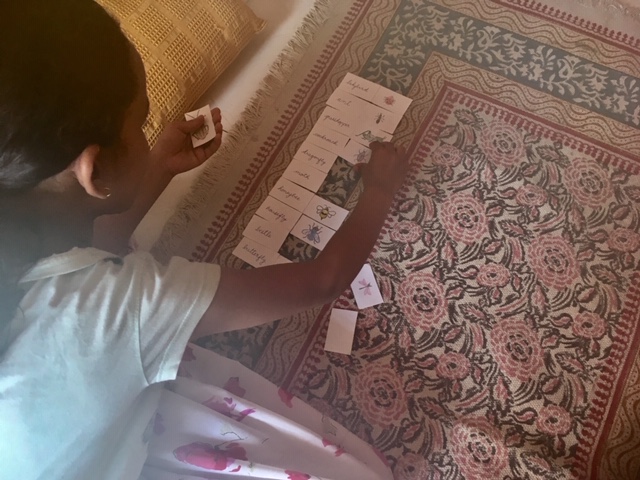 We conducted a Summer Book Club for children this summer of 2019. We had a strength of 5 children who came regularly while 2 other children came to issue books but did not attend the sessions.  Here are some of our learnings and experiences through the journey.

The initial challenge for any one starting a book club is to get children to come.  We too faced a similar challenge. While social media plays a key role in marketing an event the reality is that the event updates and details are viewed by a parent and not the child per say.  Ultimately the decision is also taken by the parent whether or not the child will attend the event. This was not a one day workshop, there was a longer commitment involved. Initially we had only two children and we began the program.  Over a period of two weeks three more children joined. These children were friends of the two children who had joined us at the beginning. It was actually the initial two children who started spreading the word among their friends. What we realized in due course of time was that one shouldn’t spend too much time worrying about the strength of the audience and marketing the event (though we do not deny its importance) but should rather focus more on the content and plan of the program itself.  One hears many people often say that if something is good people will come. Well, it is true!

While there were only 5 children there was still a wide spectrum of reading and comprehension levels in the room.  In such a situation as a facilitator one has to come up with broad goals that are applicable to the program as a whole.  Initially, there was no specific set of goals in mind for this program a part from the fact that we wanted the children to have access to good books.  This was solely because at that point we did not know who our audience would be. Only after observing these children for a few weeks certain points became clear and a broad goal emerged.  These children mostly came from a non-reading culture. Some parents could not read or write and the others who could, did so only on a need basis. Reading for leisure, pleasure, learning, exploration was not a concept in the mind of these children.  They did not have access to books at home either. Now, in a situation like this the problem was no longer about the children’s reading and comprehension levels but rather about their interest and motivation. When they did not see anyone around them reading, when they did not see books around them, when they only saw textbooks which are mainly attached with the fear of examination then why would they read here.  So, the goal became to develop an environment where books lived. But this environment could not be clinical and detached from the children. This environment had to feel like home. Hence, few steps that were taken are as follows.

We had not named our summer book club.  We gave the children the responsibility to come up with a name.  They decided on, ‘Little Angels’. We prepared the design together and pasted it on the entrance door.  Then we started preparing a snack for every session. This was a big motivation for some children to come and also the element of surprise wondering what today’s snack would be.  The children chose where they would sit. Once everyone would be present we would talk to each other about their days. Basically, we started making a little home for the children.  Where they were free to talk, and share and most importantly make decisions. It was much later that we started building a reading routine into the program. After the children shared and settled down there would be a black bag in which every session a new book was placed.  This book would be read out to them after which they all would move on to their individual work. By the fourth week the children started dropping by at all times to return and issue books. They felt comfortable and empowered because this had now become their space, their home.

Another challenge one faces about starting a book club for young children is whether one should issue books to the children.  Will the children lose them, will the books be returned in the same condition they were given in.  We too took time before we started issuing books. It was only in the third week, after we had established ‘Little Angels’ and by that we mean after we had established their home we began to issue books.  By then there was a sense of ownership and care for the things in the room. While this was tremendously helpful, one cannot be too careful with or to be honest, possessive of the books. The reality is the books did not always come back in good condition.  There would be rips and tears and sometimes stains. As discussed earlier, these children did not have access to books like these before. A book for them was not something that contained words which strung together to make a story. For most of them the books were explored physically as well.  They would share with me what had happened to the book when they returned it. One said, he had made a tent with the book to hide his share of sweets from his younger brother. Further, he said, the idea worked so well with, ‘The Insect Boy’ (a hardbound book) but when I did it again this time with, ‘Puchku’ (a softbound book) the book spread open and fell straight into the sweet.  While it does pinch to see a perfectly good book stained with food the fact that this child who did not read at all remembered the names of the books and felt sorry that it was spoilt was good enough. Yes, we say, we should not play with books. Books are meant for reading. But in education what is play. Even if an adult is handed something that s/he has never held before or does not know the potential it holds what will one do?  Explore… Play. This phase of exploring books at home to make tunnels and barriers, to fold them, to roll them, etc. all came through their sharings. We know these sharings would not have happened if the children were fearful of the facilitators. This was a good assessment for the program. Our trust in them had developed their trust in us. Now, coming back, yes, books will get spoilt and they sometimes will be misplaced. The point is that the child should feel responsible for the same.  In our program, we kept some materials (tape, stapler, thread, glue) to fix books in one corner. If a child came back with a torn book or with staples missing first and foremost s/he would share what had happened and then s/he would have to fix the book before returning it back to the shelf. But have faith and issue the books. Post the stage of ‘play’ the children will start reading. The stories about making tunnels will change to the actual stories in the books and that is all worth it.

It was only in the second month we started drawing more focus to reading and comprehension.  Now, as mentioned earlier, the reading and comprehension levels across the children were far apart.  In a case like this one really cannot have a uni-directional lesson plan that caters all. One needs to develop materials that connect with the books one has.  The books need to have supporting learning aids that the children can independently work with. Based on the number of books one has in the library this can seem like a tedious task but attempting them one by one and slow and steady is the best way.  More than that the children give you the ideas. One cannot start developing materials till there is no clarity on what the child will truly need or look for. To give you an example, there was a child who could barely read. He picked up a level one book about colours.  He was definitely interested to know the story as he would keep going back to that book and looking at the pictures. Observing this, we developed a simple material which consisted of one set of slips with different colours and one set of slips with the corresponding names of the colours.  The next time when the child came we asked him to pair the slips. We showed him how to do it and then left the child to attempt the rest on his own. The only rule he had to follow was to read the word after pairing. Every session he came, after the sharings and read aloud was over, he would pick up that material and start pairing until he started coming very close.  Then one day we asked him to pick up the same story book on colours but he adamantly said he wanted to work with the material again. We opened the book still and pointed to a word in it. The moment he saw it and read it, it was precious. He was ecstatic! He then picked up that book every session for another two weeks. Yes, it took five weeks to reach here but this is the stage one should hope to achieve.  Where the child does not see a book just as a physical entity with pages but something that has a story to offer. A similar activity worked wonderfully with an older girl who was interested in reading about insects but was finding the encyclopedia hard to comprehend. We broke down the content in the encyclopedia and made materials to pair and sort which familiarized her with certain words which in turn helped her go back to the encyclopedia. These activities were never planned.  The children tell you through their words and gestures what they need and it is up to the facilitator to act on that well in time when the interest is still alive.

When we had initially decided to conduct a summer book club we did not know which children would join us.  What would their backgrounds be or what would their reading and comprehension levels be? If we had received children who were avid readers coming from a strong reading culture this article would have been written very differently. No doubt, some core values would remain the same which would include establishing trust with the child or creating a safe and loving space for them to come and spend time.  But maybe these children would have pushed the facilitators to develop very different kinds of learning aids to support the books or there would have been the absence of an entire stage of ‘play’ for they might have already been through that at a younger age. Observing the children to understand their needs and acting on them well in time is key. We look forward to next summer to see how the new batch of children will mold the (or well, their) program.

Based on our experience with this year’s summer book club here are a few recommended books to read or use as a read aloud for 5 to 8 year olds:

A gift from the sea by Melanie Kunz (Hindi & English)